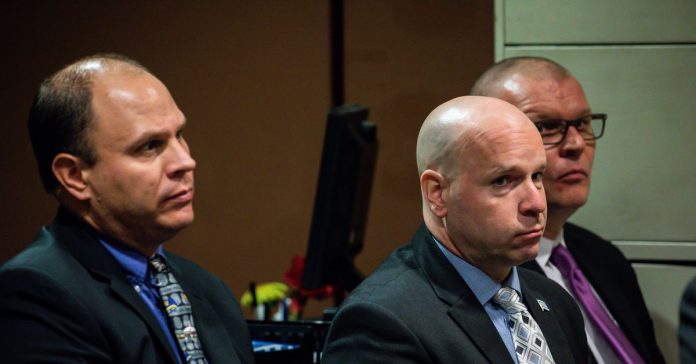 In a case that’s attracted national attention, three Chicago police officers have been found not guilty of covering up the 2014 police shooting of Laquan McDonald, a black 17-year-old, and conspiring to protect the officer who killed him.

Van Dyke shot McDonald 16 times on the night of October 20, 2014, after responding to police calls for assistance. Van Dyke claimed that he fired after McDonald failed to comply with demands to drop a knife he was holding, and made a threatening move toward police. Several police reports filed in the days after the shooting — including those written by the officers recently on trial — backed up Van Dyke’s account.

But dashcam video of the shooting released a year later showed that McDonald was walking away from officers, and did not threaten them in the moments before the shooting.

During the trial, experts and activists argued that the police reports supporting Van Dyke’s account of the shooting were a key example of the police department’s so-called code of silence, an opaque system in which officers work to shield one another from scrutiny, and allow officer misconduct to go unaddressed. The judge, who delayed her decision one month to review police documents and other evidence in the case, did not agree with this argument.

Jason Van Dyke was charged in 2015, but it wasn’t until 2017 that conspiracy charges were filed against three of the officers who backed Van Dyke’s story.

The officers disputed claims that they were part of a larger cover-up, saying that they did not have any desire or reason to protect Van Dyke. Defense attorneys argued that their clients were unfairly singled out by prosecutors, and that the shooting was McDonald’s fault. But the prosecution noted that this argument didn’t explain why their reports agreed so closely with Van Dyke’s version of events.

As the trial came to a close, some policing experts questioned if the prosecution had enough evidence. But other experts argued that the case perfectly highlighted what has been referred to as a code of silence in the Chicago Police Department.

In recent years, a number of police shootings and excessive force cases against black residents in the city have drawn attention to the systemic problem. The code of silence was also criticized in a 2017 Department of Justice report on the Chicago Police Department.

In her ruling, Stephenson argued that the prosecution had failed to sufficiently prove a conspiracy and that key witness testimony from an officer testifying against March was “not credible.” Stephenson added that the video of the shooting did not show the shooting from the officers’ vantage point.

“Only the officers involved in the incident know what their belief was at the time,” Stephenson said. “It is undisputed and undeniable McDonald was an armed assailant who refused to drop his knife as he approached a populated area.”

Speaking to reporters after the verdict, Marvin Hunter, McDonald’s great-uncle, argued that the ruling was “not justice.”

“To say that these men are not guilty is to say Jason Van Dyke is not guilty,” Hunter said.

Activists added that the verdict shows a deeper problem in the city’s justice system. “The blue code of silence is not just with the Chicago Police Department,” William Calloway, a Chicago activist and alderman candidate in Chicago’s 5th ward, told reporters. “It expands to the judicial system, and this is an example of that.”

The Thursday verdict comes one day before Van Dyke is scheduled to be sentenced for McDonald’s death. Last October, Van Dyke was convicted of second-degree murder and 16 counts of aggravated battery. He faces up to 96 years in prison.

Instagram Likes Will Start Disappearing Sooner Than You Think

15 Leopard Print Swimsuits To Get Your Paws On This Summer

How Much Cash Should You Give For A Wedding Gift?

The Beauty Products I Always Pack In My Travel Makeup Bag