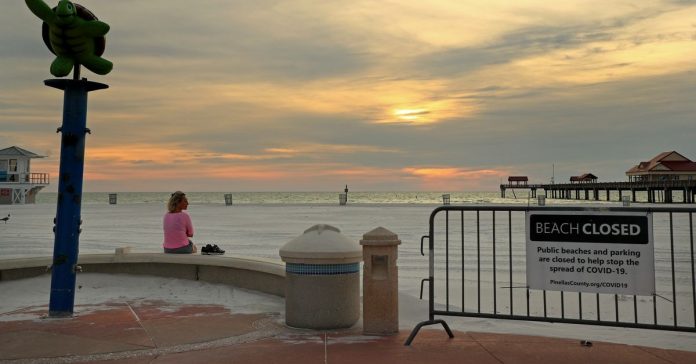 A month or so ago, Florida seemed primed to be the next epicenter of the coronavirus outbreak in America.

Pictures of spring breakers at the beach evoked fears of a young army of super spreaders. The state’s population — more than one in five are 65 or older, the highest share in the country — seemed particularly susceptible to a virus that is more dangerous to seniors. Gov. Ron DeSantis dragged his feet before finally issuing a statewide stay-at-home order on April 1.

Yet today, public health experts are conspicuously sanguine about the trendlines in the state. Nobody is declaring victory yet, not with the lag in reporting new positive cases because of testing delays. But there is some glimmer of hope. Why, given everything we know and don’t know about this disease, does Florida seem to largely have been spared (at least so far)?

As Thomas Hladish, a research scientist at the University of Florida’s Emerging Pathogens Institute, put it to me, the Florida outbreak is “a puzzle that still has to be explained.”

In raw totals, Florida had the eighth-most coronavirus cases as of April 24. It has the third-most people, so if you adjust for population, Florida slides all the way down to 18th in Covid-19 cases per capita, according to tabulations from USA Today last week.

The important indicators — daily new cases and deaths — haven’t totally taken a turn for the better yet, but they don’t appear to be getting dramatically worse either.

“It looks to me like we are not really declining at this point, but we’re on a plateau,” Hladish said, adding the Florida outbreak was “clearly not growing exponentially.”

To account some for the lag in reporting delays, let’s go back a couple of weeks to see how Covid-19 is trending in the Sunshine State.

On April 13, there were 995 new cases reported. On April 20, there were 763. There were 41 deaths on April 13 and 38 on April 20. The high point for new cases was April 3; for daily deaths, it was April 6. Even allowing for imperfect reporting, Florida does not seem to be experiencing exponential growth like we saw in New York City. It is testing at an average rate, ranking 20th in tests per million people. So while a fair number of cases could be being missed, the state is not an outlier by any means in its ability to track the disease.

Jerne Shapiro, a lecturer at the University of Florida’s epidemiology department, summarized her feelings like this: “I am optimistic when I’m looking at those trendlines.”

So why haven’t our worst fears for Florida come to pass? With one more caution that things could still break bad in the coming days and weeks, let’s run through a few of the theories I went over with public health experts in the state.

Every expert I talked to cited social distancing, first and foremost, as the best explanation for the seeming plateau of Covid-19 cases in Florida.

“We’re doing a really good job of social distancing,” Shapiro said. “People are taking it seriously, and that allows us to slow the spread of the disease.”

Gary Wang, chief of the UF College of Medicine’s infectious disease and global health division, was only willing to cite one thing to explain the Florida trends: “good social distancing.”

As it turns out, news coverage might have given a misleading picture of how Floridians were actually responding to the coronavirus threat.

According to Google’s mobility reports, Florida is actually outperforming the US average on every metric of social distancing the tech company is tracking. Retail visits are down 49 percent (45 percent across the US). Trips to grocery stores and pharmacies have dropped 20 percent (7 percent US average), and people are going to parks less (down 54 percent versus 16 percent nationwide).

Though DeSantis was reluctant to issue a statewide stay-at-home order, many localities had already taken that critical step before he came around on April 1. Miami-Dade and Broward counties had already urged residents to stay home by late March.

Florida may also have benefited from the precautions being taken in other states, which limited travel to this tourism-dependent state.

“That’s been better for Covid-19, though it’s not been great for our economy,” Cindy Prins, assistant dean at UF’s College of Public Health and an epidemiology professor, told me. “People got the message early on to protect themselves.”

Florida has important structural advantages for social distancing, too

One thing I think is often overlooked in the conversations about social distancing is the environmental factors. Florida has at least two obvious advantages over somewhere like New York when it comes to keeping one’s distance: More people live in single-family homes, and more people travel by car than public transportation.

Owner-occupied homes are a useful proxy for single-family households. Higher rates of ownership generally translate to more people living in a standalone house, while more rentals typically mean more people living in multi-unit facilities. Per census data, the owner-occupied housing rate in Florida is 65 percent, while in New York City, it is about 33 percent. (For all of New York state, it’s about 54 percent.)

The number of people per household is almost identical between the two places, so the difference is really in living situation.

“Even in some of our more urban areas, we don’t have the population density that you have in New York,” Prins said. “Higher population density, you’re always more likely to be exposed. You’re encountering more people and more at risk of being exposed.”

In an apartment building, Hladish said, “you can’t help the fact you’re touching the same elevator buttons or the same handrails.”

Some recent studies have suggested public transportation was also an important vector in New York, though others have cast doubt on that theory. Regardless, it is undeniable that Floridians find themselves in their cars a lot more than on mass transit.

In 2013, nearly 80 percent of people in Florida commuted alone in their car, truck, or van. In New York state, it was a little over 50 percent, while 28 percent were commuting via public transportation. In Florida, just 2 percent of people get to work by bus or subway.

“It’s a lot easier to stay away from your neighbors here,” Hladish says.

So while New Yorkers and Floridians might be equally committed to social distancing — Google’s mobility reports show similar trends — the latter group might simply find it easier to do.

“It’s not that Floridians cared more or are better at it,” Hladish says. “They may have simply been in a better position to take initiative at the individual level.”

One unknown: how much humidity and temperature helped or didn’t help

Given all the recent debate about how much higher temperatures or humidity might limit the coronavirus’s spread, or not, we would be remiss not to address it in the country’s hottest and most humid states. As Shapiro pointed out, Florida has already experienced 90-plus-degree days.

It’s possible there has been a marginal effect — but not in the way you might think. In general, the experts I talked to were unpersuaded that heat or humidity would explain Florida’s relatively mild coronavirus outbreak thus far.

“I don’t see that temperature and humidity would really have any effect. Even if they have one, I don’t think we would see it,” Prins said. “It’s just too easy for it to spread right now. We have too large a susceptible population.”

An MIT study from mid-March concluded that while climate factors might have some limited effect on the virus, “it is extremely unlikely that the spread of [Covid-19] would slow down in the USA or Europe, due to environmental factors.”

Hladish agreed that he didn’t think heat and humidity on their own would be a big factor. But he did raise the possibility that warmer weather makes it easier for people to get outside — and get away from other people — which matters because the virus can spread more easily in indoor settings than outdoors.

“I think the behavioral effects of weather are more likely to be a factor,” he said. “In Florida, in many parts of the state, you can go outside and be away from other people.”

Hladish added that was actually part of the reason he wasn’t particularly concerned about reopening beaches. From an epidemiological perspective, it would be best to keep them closed. But if something is going to open, as state leaders are insisting, then beaches might be better than other options.

“We were going to do something, and I think this is relatively low risk,” Hladish said. “I have a hard time imagining there’s a lot of transmission happening at the beach.”

Though the virus seems to spread much more indoors, his concern was more that the people who are rushing out to the beaches are also engaging in other risky behaviors that could lead to the virus spreading.

“I think the bigger concern is there are a whole lot of people who just don’t care and aren’t worried,” he said.

So social distancing, and Florida’s structural advantages in social distancing, seems like the most likely explanation for the plateauing outbreak there. The weather may be playing some marginal role, but the state can’t depend on its climate alone to save it from the coronavirus. And there was probably a bit of luck, too: As Vox’s German Lopez explained, some of the variance between places is simply a matter of when the virus showed up there.

But every expert I spoke with emphasized, again and again, that Florida shouldn’t rest easy yet.

“Social distancing has been working, but we should not conclude that we’re declining yet,” Hladish said.

The test reporting lags are one cause for concern. The consensus seems to be that states should see two weeks of declining deaths and cases, at a minimum, before they start to think about any plans to start reopening businesses and public activities.

“We have to be very cautious thinking that yesterday’s number of cases is a trend,” Prins said. “It’s not yet.”

If social distancing is relaxed too quickly, the coronavirus could come roaring back. Public health experts worry that politicians will simply look at data visualizations, see a flattened curve, and conclude it’s safe for life to go back to normal.

Hladish isn’t too worried about beaches reopening. If there is an effect, he doesn’t think it would lead to an explosion of cases.

But he does add, as a word of warning: “I do think that would happen if we ended the lockdowns.”

This story appears in VoxCare, a newsletter from Vox on the latest twists and turns in America’s health care debate. Sign up to get VoxCare in your inbox along with more health care stats and news.

Get our newsletter in your inbox once a week.

Every day at Vox, we aim to answer your most important questions and provide you, and our audience around the world, with information that has the power to save lives. Our mission has never been more vital than it is in this moment: to empower you through understanding. Vox’s work is reaching more people than ever, but our distinctive brand of explanatory journalism takes resources — particularly during a pandemic and an economic downturn. Your financial contribution will not constitute a donation, but it will enable our staff to continue to offer free articles, videos, and podcasts at the quality and volume that this moment requires. Please consider making a contribution to Vox today. 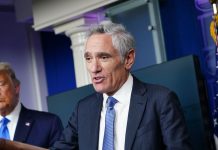 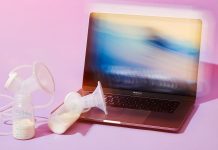 To Make Things Worst, A New Survey Says Dads Are More Likely To Get Promoted While Working From Home 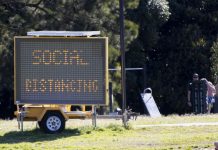 Australia just had its worst day of coronavirus. Yet health experts remain optimistic.

Bath & Body Works Is Having A Huge Fall Candle Sale — & Everything...